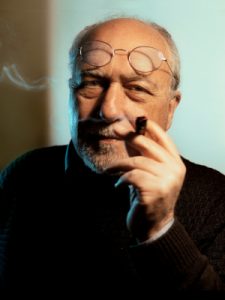 Lawyer at the supreme court, specialized in international law, is also a painter and a sculptor. He is the President of the “Gaia International Film Festival”.

Nephew of Giulio Danieli and son of Vincenzo, militant antifascists in Puglia; he conducts policy in the    political organizations of the left students in Milan and Bologna.

It is also one of the founders of the “Movimento per la Democrazia-La Rete”, of which he became Coordinator for the Emilia-Romagna and later National Spokesman.

Always committed on the theme of the legality, human rights and against death penalty, has promoted several initiatives and international campaigns for awareness (including some with the participation of Antonino Caponnetto, Sister Helen Prejean…).

In the 90’s works to the reconstitution of the “Associazione italiana Giuristi Democratici” (Italian Association of democratic lawyers) with, among others, Franco Ippolito, Gianni Lanzinger, Fabrizio Clementi and Fabio Marcelli.

Elected to the Camera dei Deputati in the 12th and 13th term, was political group leader in the Foreign Affairs Committee; he was appointed Deputy Minister at the Ministry of Foreign Affairs in the II D’Alema Government and II Amato Government, with responsibility for bilateral relations with the countries of the American continent, the promotion of Italian culture, Italians in the world.

Has started the phase of the signing and ratification of the “European Landscape Convention” and defined the constitutional changes on the vote to italians abroad; he has promoted initiatives for the promotion and protection of the culture and of the Italian artistic heritage, among other things, organising exhibitions abroad of young students of the Academy of Fine Arts in Rome and in order to avoid the dispersion, in Brazil, an important collection of drawings of Sartorio.

He promoted and signed many international agreements, including that of strategic partnership with Chile at the beginning of the Presidency Lagos.

It is involved in the recovery of evidence in support of the prosecution   – in a criminal trial in the “Corte di Assise di Roma” – against argentine military accused of the death of Italian citizens during the years of the dictatorship; he also supported the activities of the associations of the families of the “desaparecidos” (disappeared) in Latin America.

Elected to the Senato della Repubblica in the XIV and XV legislature, he was Vice-president of the Committee for Foreign Affairs, the President of the Italian Section of the inter-Parliamentary Union for relations with the countries of the former Soviet Union and a member of the Italian parliamentarian delegation to the Council of Europe in Strasbourg, and that of the U.E.O. in Paris.

He was appointed Vice Minister of Foreign Affairs in the II Prodi Government (17 2006/05- 06 2008-05) with institutional mandate to the Italians in the world; he has followed and resolved numerous cases of seizures of Italian citizens abroad, has dealt with and institutionalized the problem of child abduction (italian children of mixed couples); was among the protagonists of the assignment of the Expo 2015 to Milano.

He founded the “CenRI” (Centre for international relations), and editor of the journal of geopolitical studies “Analisi XXI“.

This website uses cookies to improve your experience while you navigate through the website. Out of these, the cookies that are categorized as necessary are stored on your browser as they are essential for the working of basic functionalities of the website. We also use third-party cookies that help us analyze and understand how you use this website. These cookies will be stored in your browser only with your consent. You also have the option to opt-out of these cookies. But opting out of some of these cookies may affect your browsing experience.
Necessary Sempre abilitato
Necessary cookies are absolutely essential for the website to function properly. These cookies ensure basic functionalities and security features of the website, anonymously.
Functional
Functional cookies help to perform certain functionalities like sharing the content of the website on social media platforms, collect feedbacks, and other third-party features.
Performance
Performance cookies are used to understand and analyze the key performance indexes of the website which helps in delivering a better user experience for the visitors.
Analytics
Analytical cookies are used to understand how visitors interact with the website. These cookies help provide information on metrics the number of visitors, bounce rate, traffic source, etc.
Advertisement
Advertisement cookies are used to provide visitors with relevant ads and marketing campaigns. These cookies track visitors across websites and collect information to provide customized ads.
Others
Other uncategorized cookies are those that are being analyzed and have not been classified into a category as yet.
ACCETTA E SALVA
Powered by